Josh Ostrovsky aka The Fat Jew is known around the world as the Instagram superstar and plus-sized model that has provided human beings with endless laughs and absurd delight through his infamous Instagram page abounding with pop culture memes and more. The rowdy man who has created a career out of morphing an Instagram account into an online comedy planet of it’s own has made waves in the entertainment industry and sparked controversy with his unnerving humor around the globe. I touched base with the man behind the madness to discuss his online ascension, off the wall artistic projects and more. 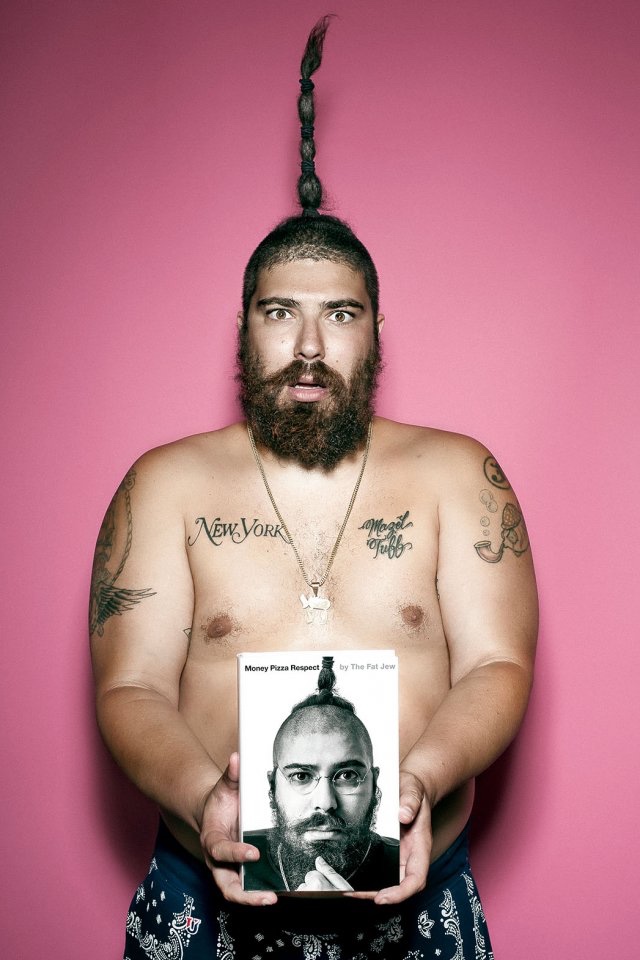 First and foremost, introduce yourself to the world. How was The Fat Jew brought to life?

You know, everyone had literal nicknames. You know, such as Hot Breath Omar. I am literally just a Fat Jew. I was being an idiot before there were places on the internet to share being an idiot. I am old enough to remember a time when you would do really stupid shit just for people to hear about, talk about and for people see live and if you weren’t there, you weren’t there. But, I am young enough to also now really put that idiotic mindset to work. And now I have a huge fucking following and giant network of people that I can share my stupidity with.

Where were you brought up and how has that influenced your extensive knowledge of Pop Culture?

My mom is a Queen of memes. I was raised in a network of unbelievably peaceful, hip gay men. I had a male housekeeper and he was a gay Maliasian dude who like wore cut off shorts and all of my mom’s friends are beautiful, rich power gays. I was sorta raised by them. I had ten to fifteen uncles with sun-splashed brown thumbs and incredible shoes with hyper-judgemental attitudes. I think that that combined with Jewish summer camp and really getting to figure out how to get to third base with a girl named Rachel; that all together made me the man that I am today. I was raised by ten, peaceful gay dads, basically.

Jessica (laughs)- And you know, it warms my heart that it’s lead you to the position that you’re in today. It really, really does.

Fat Jew (laughs) – I appreciate that. Every day, I never know where I am going to wake up. And that’s the best part. There’s wine marketing and the rose stuff that takes a part of my day, and then I just try to get out there. I’ll probably eat a panani at some point throughout the day. My office is in the back of a nail salon in Queens, I rent out their waxing room. So, I go to the nail salon. 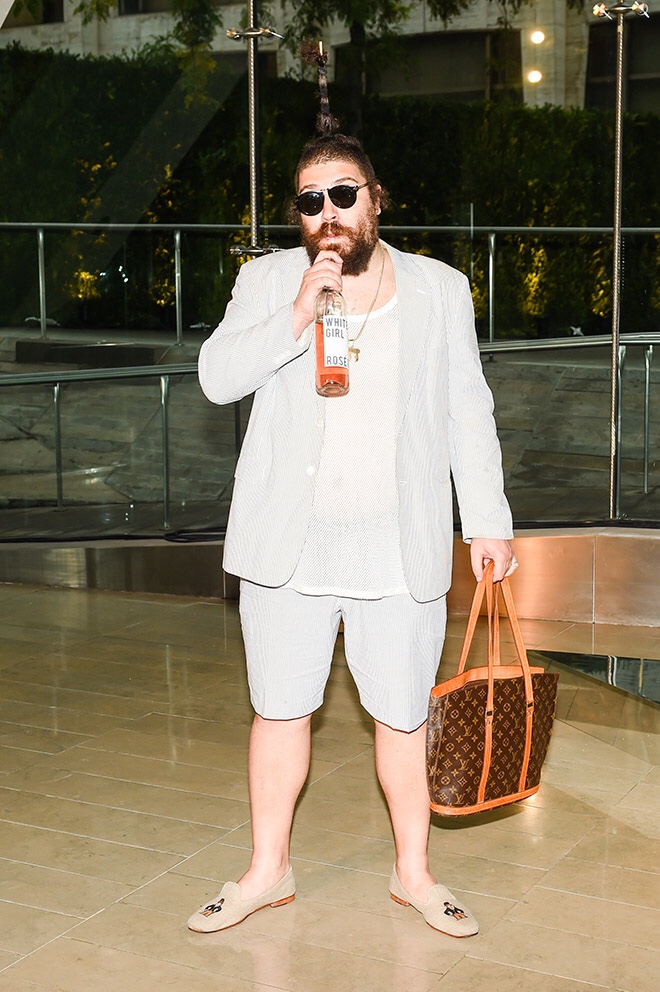 Jessica – I’m sure that they take great care of you.

Fat Jew – Yeah, they really do. My pubic designs are top notch. It’s a wonderful benefit. I have interns and we’re working on everything. Instagram brings a lot of interesting opportunity; people asking me to take them to prom, or a bunch of people will ask me to go on their yacht in France. I actually wrote about it in the book, I went on a yacht with a bunch of Scandinavians and they took me down to the deck and said that they wanted to show me something. So, I went down, and I thought it was going to be grenades, gold or something ridiculous, but, they had a live ostrich chillin’ in a room as their pat. They were like, “You cannot touch him. He is very dangerous. Do not go near him.” It was an ostrich, just chillin’ in a room on a yacht, and they named him Bradley Cooper. And I’m like, how do I get into these situations? It’s not about money, it’s about the fucking memories.

Jessica – It is, man. And you are really putting yourself out there. These days, there are so many pigeons out there who are afraid to even cross the fucking street, and the things that you’re doing are really standout and bold, which can serve to influence an alternative culture. You only live once. Make some bad decisions. You’ll tell a damn good story. And you never know where that’ll get you. I mean, look at you.

Tell us more about your plus size modeling career.

You know, there’s the female sorta plus size movement really gaining a ton of momentum which is really amazing because there is nothing better than full-figured women. And it’s really inspiring to watch. And then I thought, why aren’t there any men doing this? I really embrace my Shrek body, it’s probably the one really positive thing that I’ve ever done. You know, people hit me up and say thank you for being so comfortable with being in your body and being willing to be naked. You know, because I’ll show off my penis, which is basically a fleshy champagne cork, and you know, you’d think that I should really keep that under wraps. But I’ve gotten messages from people thanking me for being so proud of my mediocre body. And it’s really unintentional. I wasn’t trying to do it at all.

Jessica – Right, and you know, it’s society’s perception of mediocre. To each their own. If that’s the body that you enjoy being in, then that’s beautiful. And you know what? There are a lot of insecure individuals, both men and women, who struggle with that. And being a key factor in that with your platform and sharing that people should just fucking embrace themselves and who they truly are is a beautiful thing.

Fat Jew – I completely agree. I also think that having a sick body for a man where you’ve got abs up to your neck and those V lines that you get when you’re in killer shape that go toward your dick, I think having those are super lame. It means that you don’t have any friends. You’re at the gym all of the time. Why aren’t you out doing stupid shit with your friends? 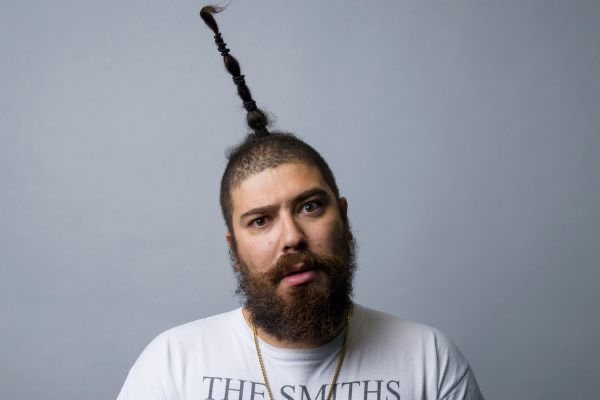 Jessica – Dude, you do have to spend a significant amount of time at the gym for that unless you’re a fucking genetic God.

Fat Jew – Right. Unless you’re a NFL player who eats a ton of Mcdonald’s and still gets stronger, it means you’re at the gym a lot. And I kind of think that you’re a loser. You should be out getting shitty tattoos with your friends while drunk. Not waking up and not going to the gym. I’m not advocating anyone to be so fat that they have to be in a rascal scooter, although that does sound chill, or you know those railings that go up the stairs where you have to sit on the chair and it takes you up the railing?

Jessica – Yeah. Like a chair lift on a ski hill but in a public setting?

Fat Jew – Yeah. Those are fucking chill as hell, but don’t be so fat that you need any of that. Take care of yourself enough to ensure that you’re healthy, and go do fucking stupid shit with your friends and not at the gym with an acai bowl.”

If you were an animated character, who would you be and why?

Jessica – Ultimately, you have your category that Instagram placed you in as a public figure, but what the fuck; you don’t have to define yourself. You’re a human being just doing whatever the fuck you want to do.

Fat Jew – Exactly. About a month ago, I just drove cross country and reviewed the food at fifty different strip clubs. Just the food. And it’s coming out in a magazine. We’re hitting a little bit of social media burnout. Too many pictures of babies, sunsets, 5ks and you know, fucking acai bowls. Eventually, real life is going to get hot again. And as much as I love the internet and Instagram, which has been so fun and taking me to some really fucking weird places, real life is where the fuck it’s at. I’m not sitting in a basement finding funny pictures for the internet. I am literally driving cross country and reviewing the risotto at a strip club in Tampa Bay.

Last but certainly not least, what’s your motto or advice that you live by?

You can’t ever get an STD if you don’t go to the doctor and know that you have it. It’s 2020, honestly, anything is fucking possible. They used to say that twenty-five years ago, but that wasn’t true. Thirty years ago, you could only have this one job where you’re one fucking word, you know, you’re a doctor, a garbage man, or you worked at a bakery. But now, the world is basically ending. The polaroid ice caps are melting, Donald Trump is President, everything is crazy. As scary as that is, it really means that you have to remember that anything is genuinely fucking possible. If you want to start a fucking company that makes scarves for dogs, that shit now works. Everybody wants a fucking scarf for their dog.

Jessica – You’d bank. That would blow up with all of the basic bitches around the world.

Fat Jew – I agree. Exactly. Thirty years ago, if you started a scarf dog company, how would people find out about you? How would you of even known where people were that want scarves for their dogs? People weren’t even open-minded enough to think that their dog needed a scarf. Absolutely anything is possible. 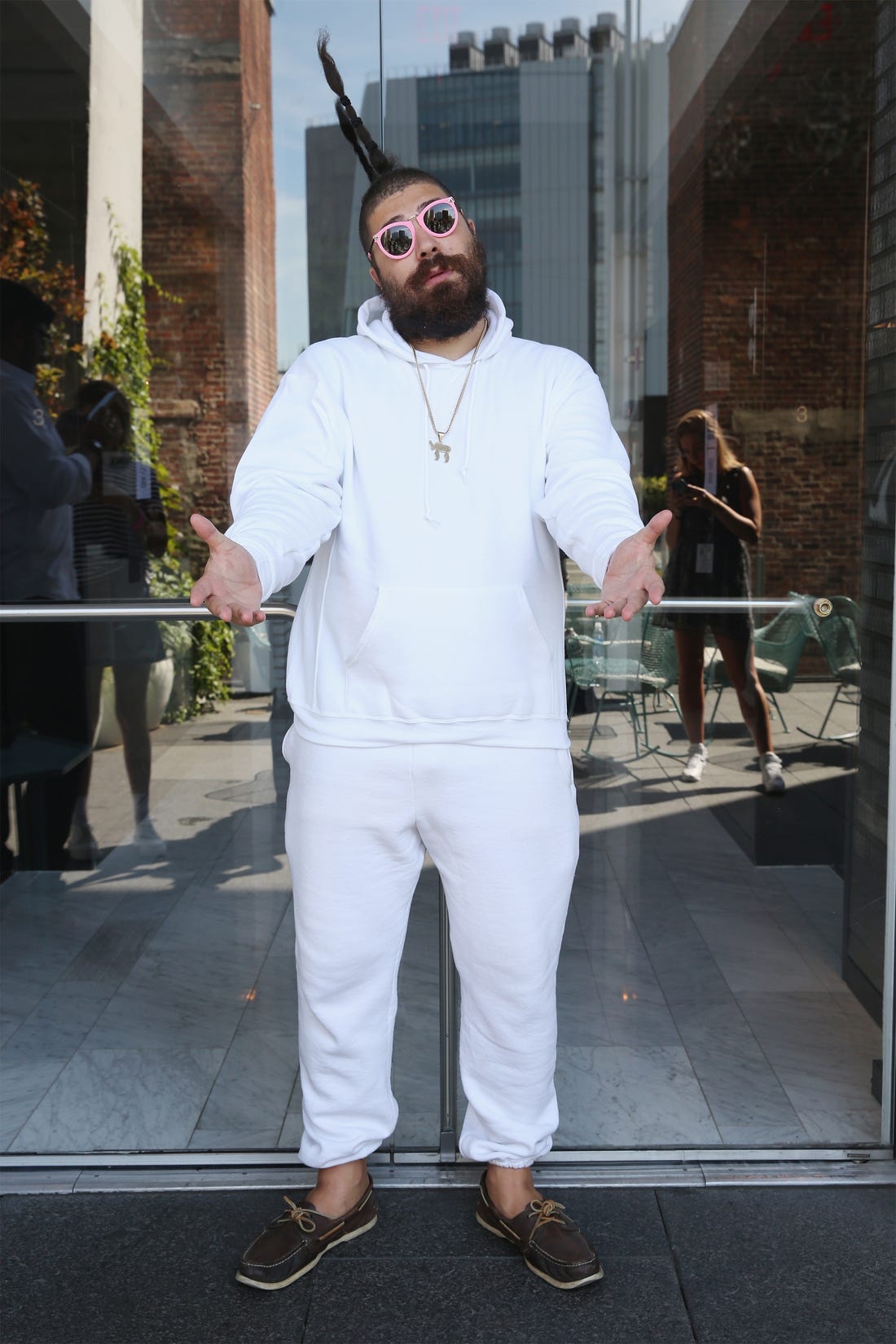